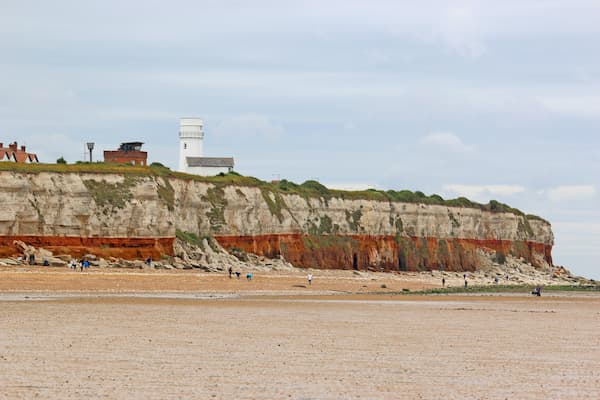 History of the Seaside in Hunstanton

The fabulous seaside resort we all know as Sunny Hunny was once little more than a village, similar in size to what is today known as Old Hunstanton. Today, it is one of the finest surviving examples of the British seaside resort in Norfolk, and continues to attract holidaymakers in their thousands each summer.

In our latest article, we take you from the birth of the resort, through to the modern day, celebrating the History of the Seaside in Hunstanton.

The history of Hunstanton as a seaside resort began in 1845 with the vision of Henry Le Strange, a local landowner, who dreamt of building a bathing resort south of the village of Hunstanton. To distinguish the proposed resort from the village, it was referred to as 'New Hunstanton', with the original village becoming 'Old Hunstanton' (by which it is still known today). Mr Le Strange personally designed the resort at New Hunstanton, centred around a distinctive triangular green, flanked by buildings on either side, and sloping down towards the sea.

Bathing resorts were the latest fashion in the Victorian era, and to take advantage of this new craze, Hunstanton would have to be serviced by public transport. The first building at the resort was erected in 1846, but it wasn't until 1862 that the Great Eastern Counties Railway built a line from King’s Lynn to Hunstanton, making the resort instantly accessible to day-trippers who, on alighting from the station, were able to step out directly onto the seaside promenade.

A Victorian seaside resort wouldn't be complete without a pier, and in 1870 the Hunstanton Pier was erected, with a pavilion added in 1890. This was a typical, if exceptionally long Victorian pleasure pier, with a miniature steam railway running up and down to the pavilion. Unfortunately, the pier has not survived today, suffering fire damage in the 1930s and 1950s, before almost being washed away entirely in the storm of 1978. What remained of the pier was eventually destroyed by a fire in 2002. A bowling alley and amusement arcade now stand on the spot where the pier once began.

The early 20th century was another boom period for seaside resorts, with workers heading for the seaside en masse on newly created bank holidays. At Hunstanton, the resort continued to grow, with the Blue Lagoon swimming pool built in 1927, and the Capital Cinema and a boating lake in 1932. In 1936, our own history began, as Searles Leisure Resort opened as a caravan site to meet the demand created by the influx of Hunstanton holidaymakers. In this period, Hunstanton's reputation grew apace, even becoming a favoured retreat for writers such as H. G. Wells and P. G. Wodehouse.

School Trips and Days at the Beach

Post-war, another tradition began, as children from neighbouring counties embarked on school trips to Hunstanton. Here, schoolchildren would make a sketch of the lighthouse at Old Hunstanton; take a trip to the SeaLife Centre, and, if they were lucky, end with fish and chips on the seafront!

Today, Hunstanton remains hugely popular all year round, and, along with Cromer and Sheringham, is one of the most cherished of Norfolk's Victorian seaside resorts. The people have changed, the pier has disappeared, but the spirit of the seaside at Hunstanton remains, as new generations continue to enjoy this very special seaside town.

To make your own history of Hunstanton, book a stay at Searles Leisure Resort, the 2019 AA Holiday Centre of the Year. Check out our awesome special offers, here!