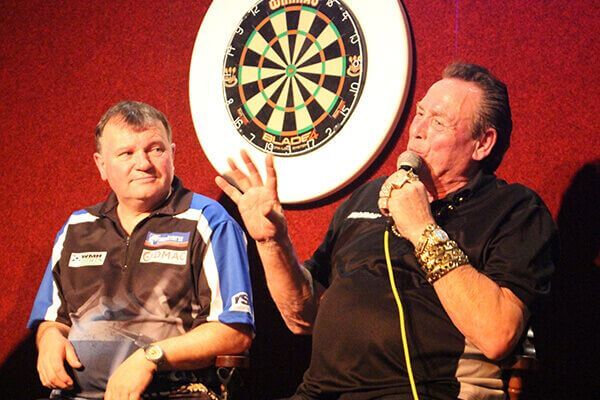 Searles were delighted to hold their first ever darts event at the resort in February. Organised with JBD Sports Agent, legends Bobby George, Terry 'The Bull' Jenkins, Steve Brown and Chris Mason came to the resort and three hundred darts enthusiasts were treated to two nights of top darts and entertainment.

On the first evening the 'legends' took part in a Q&A session with the guests with MC Paul Starr co-ordinating the event. followed by autograph signing and of course 'selfies'!

The 'Main Event' took place on Saturday where prior to the evening local challengers had competed to be one of a lucky four to take on the legends in the evening.

In the evening guests, Clint Mason, Paul Addies, Shaun Futter and Sheridan Dyer took on the star opposition. Clint Mason won the tournament and Shaun Futter had a night to remember as he beat PDC professional Steve Brown.

"I've always been interested in darts on TV and I thought darts would work here", said Searles Managing Director Paul Searles. "Entertainment like this, plus music shows and conferences brings business to Hunstanton through the winter season".

Searles Darts Classic Weekend will be returning in 2018!